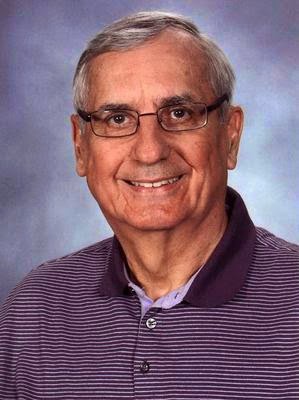 Hi Friends!
The Bible says "Elders who direct the affairs of the church well are worthy of double honor, especially those whose work is preaching and teaching" (I Timothy 5:17).

The man pictured to the left is Terry Ohlinger who served as an Elder in the North Terrace Church of Christ during my teenage years.

Terry recently passed away at the age of 70 after battling a crippling pulmonary disorder during the last several years of his life.

He worked over 40 years in public education, spending the majority of his career at Zanesville City and Franklin Local Schools. He also worked in the Meigs Local and Maysville Local school districts.

In addition to his parents, he was preceded in death by his brother Philip Ohlinger; and sister-in-law Carol (Evans) Ohlinger.

Terry is an Elder worthy of double honor: he could preach well and in my opinion teach even better. But best of all Terry served others as unto the Lord with great humility and God-given humor.

One of the many lessons I learned from Terry and have sought to pass on to my family and church family is one that I refer to as "the dipper and the bucket." As I recall and retell the lesson, the idea is for us to dip into God's bucket of love and then pour that love out into the lives of others.

As students often do, one might ask the teacher what happens when the bucket is empty? Terry responded by assuring everyone with his teaching and more importantly with his life, that the supply of God's love cannot be exhausted by human demands.

From my perspective, that lesson alone makes Terry Ohlinger worthy of double, triple, or quadruple honor...worthy of all the honor we can give him. But if you know Terry as I do, you know from his perspective he would want all the honor afforded him to go to His Savior and Lord Jesus Christ.

Would that we all would dip into the bucket and pour out the love of God into the lives of others as Terry Ohlinger did with his life: to do so would honor Jesus with a life well lived that touched and shaped the lives of countless others with great humility and great humor (just look again at his smile).