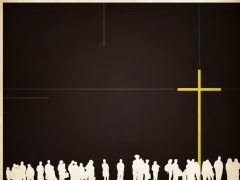 The cross confronts us with the reality of our sin (Romans 3:23). It calls us to repent: to turn away from sin and turn toward Jesus (Acts 2:38). It challenges us to trust Jesus as the perfect embodiment of absolute truth (John 14:6).

Why do people refuse to accept Jesus as their Savior and often react with hostility at the mention of His name? Because the modern mind has been conditioned by moral relativism to believe the cross is foolishness and that truth is self-defined. The problem with such a worldview is that it continually and consistently compounds sin and its consequences.

For example: how many shootings have occurred over the past 14 days on college campuses in America? How many young people have died? Is it because there are guns available to students or is it because shooting someone is a matter of morality and the heart?

Has it occurred to anyone that we are becoming increasingly desensitized to man's inhumanity to man because we have been taught to believe that higher education is possible apart from absolute truth?

Has it occurred to anyone that America led the world in civility, creativity, intellectual construction, and humanitarian compassion when Bibles were open and prayers were offered in public schools?

Could it be that the modern mind conditioned by moral relativism is running out of answers for the consequences of education devoid of absolute truth?

Perhaps we'll do some more research...

Perhaps rather than perish and accept man's escalating inhumanity to man as the social norm and measurable outcome of education apart from God, perhaps rather than being foolish, we once again will see the cross as the power of God that saves us from our sin.

My heart breaks for the diminishing returns in education devoid of absolute truth.

My heart breaks for young people who desire significance and have been conditioned to believe they will find it apart from God.

My heart breaks that we fail to see that education apart from the absolute truth of God's Word is rendering the lowest test scores for humanitarian harmony in American history.

I believe at some point absolute truth will prevail over moral relativism and eliminate the futility of education apart from God. My prayer is that the church be courageous and gracious in modeling Jesus in hopes of returning communities across America into safe havens of higher education.

I've shared this before but in the link that follows Ravi Zacharias speaks to the root issue of sin and waywardness in our culture. May the applause and laughter signify that the battle for the human heart is ultimately God's and we are called as followers of Christ to simply be compassionate stewards of His truth.